Broad Avenue, the original main street of a long-abandoned railroad town, slowly fell into disrepair after it was annexed by Memphis in 1919. By the 1990s, Broad Avenue was all but abandoned. A few struggling art galleries here and there taking advantage of the rock-bottom rents in the nation’s poorest major metro area, but mostly boarded up storefronts along a desolate street.

In the mid-2000s, some Memphis residents developed an interest in the downtown street, and what happened next is one of the most inspiring and unusual cases of community-led urban development seen in the US. Livable Streets Memphis approached Broad Avenue businesses about a vision to build a protected bike lane along the forgotten street, connecting a popular multi-use trail to the city’s largest park. With the support of the city and the surrounding businesses, they rolled out the idea with dramatic flair. Painting a temporary bike lane on to the street and temporarily closing it off to traffic, they held a one-day celebration with art, food, live music, and family-friendly activities that drew a crowd in the area of 15,000 people. The event was such a success that it begot the promise of permanent infrastructure, leading to $6 million in private investment in the area, the opening of new businesses and the renovating of many more. Today the Broad Avenue Arts District is one of the most popular shopping, arts, and entertainment areas in downtown Memphis. 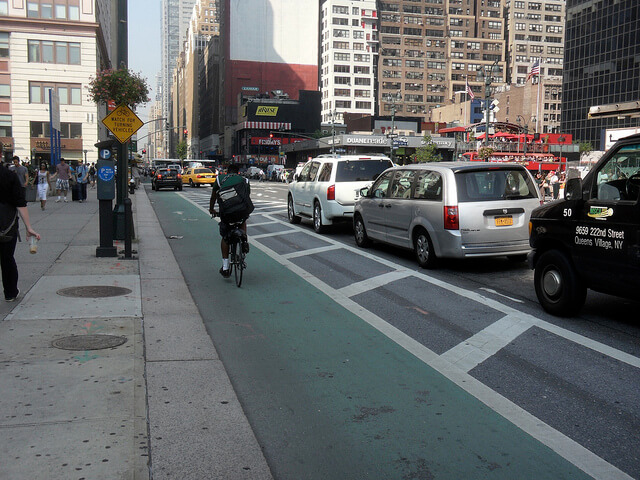 Between 2007 and 2013, largely under the leadership of urban planning visionary Janette Sadik-Khan, New York City’s Department of Transportation installed over 400 miles of bike lanes and 35 miles of protected bike lanes, converted Times Square into a pedestrian plaza, and oversaw the introduction of the CitiBike bike share.

Sadik-Khan has been quoted as saying that they “fought for every inch” of space converted into bike and pedestrian-friendly places. The street transformation was hotly contested, polarizing, and a nonstop subject of emotional debate in the media, government offices, in businesses, and on the street. When all was said and done, it was also wildly successful.

The city’s transformation has also resulted in a multitude of other improvements such as markedly increased bike ridership, increased bus ridership, decreased speeding but increased median travel times, and a significant reduction in traffic crashes and injury.

Forth Worth’s Magnolia Street has long been its neighborhood’s most active and well-known street, but for decades its four lanes of fast-moving auto traffic made it unappealing (or impossible) for anyone traveling outside of a car. In 2008, the city undertook a dramatic street redesign, narrowing the four car lanes down to one in either direction, with an added lane for bicycles. Bike racks were installed in front of every business, providing parking for 160 bikes.

The result? Restaurant revenues along the popular street went up a combined total of 179%. While correlation doesn’t imply causation, there was certainly no drop in business due to the bike lane. In the immediate years after the redesign, a local coffee shop whose business was boosted by the new infrastructure found that the city-provided bike racks weren’t sufficient, and installed their own rows of bike parking, to the tune of double, to keep up with the growing customer demand. 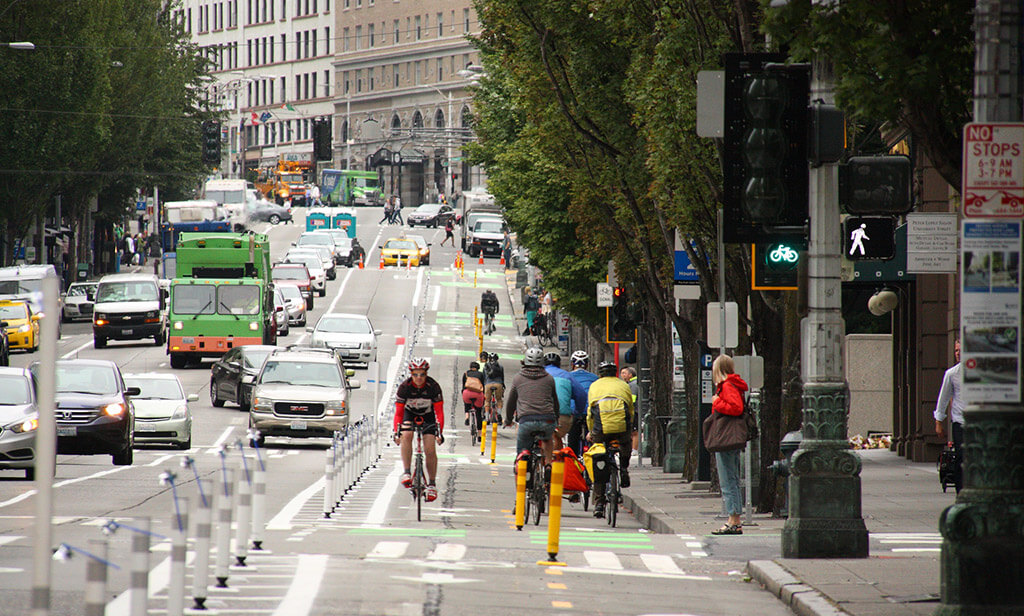 The Free Rider Myth – Who Really Pays for the Roads?

A few years back, Seattle announced a plan to remove 12 parking spaces to install a bike lane along a section of 65th street. Local business owners were not pleased, and much fuss was made about the looming loss of revenue that would surely befall them once the bike lane was constructed. Wondering if all of the fuss was about nothing, University of Washington researcher Kyle Rowe began collecting retail sales tax data from local businesses before the bike lane’s installation, and again afterwards. What he discovered was surprising, to say the least. Local businesses along the 65th street corridor where the bike lane was installed experienced growth of 400 percent in their sales index. Four hundred percent. Other businesses in the surrounding area experienced growth of less than 10%.

Rowe didn’t have experimental controls to conclude that the bike lane caused the growth, so to make sure his results weren’t a fluke, he conducted the same research for a new bike lane in the nearby Greenwood district. Somewhat anti-climactically, those businesses saw a growth which was on par with the rest of the neighhorhood. In the end Rowe concluded that the bike lanes had, optimistically, a positive impact, and if nothing else, no negative impacts.

When Salt Lake City announced plans to install a protected bike lane along 9 blocks of a busy downtown street, local business owners were worried. The bike lane would require a road diet of five general travel lanes to three, and a 30 percent reduction in parking spaces. How was the dramatic reduction in parking going to affect their business? Two years later, it would prove that the bike lane – and its accompanying streetscape improvements such as planters and public art – did affect their business, but not in the way they’d imagined.

Salt Lake City conducted an in-house analysis of their 300 South street redesign to determine its economic impact on local business. They compared sales tax data from early 2013, prior to the bike lane’s installation, to early 2015, after it was completed. They recorded an 8.79% increase in Sales Tax Gross Receipts along the lane corridor pre-project to post-project, compared to a 7% increase citywide. Anecdotally, they noted that 79% of businesses along the lane corridor reported business as being “good” after the installation of the bike lane, with an additional 16% reporting that business is “up” or “setting records.”

As for usage, the corridor saw a 30% increase in cycling rates, with that figure jumping to 89% on concert series nights, and an observed increase in family and casual cyclists. 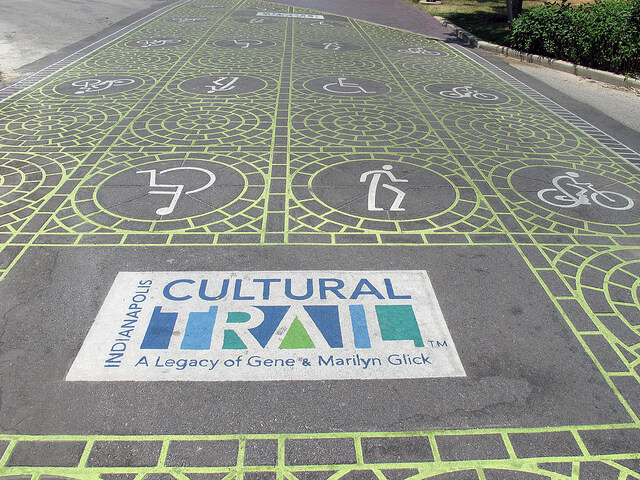 In 2008, the city of Indianapolis set to work building a world-class bike and pedestrian trail that would stretch across 8 miles of their downtown core. By 2013, the Indianapolis Cultural Trail was complete, and residents and visitors had a new opportunity to bike and walk safely through six Cultural Districts of the midwestern city.

The result? Properties within one block of the trail increased in value by 148% between 2008 and 2015 – a $1 billion increase in assessed property value from the $63 million public and private investment it took to build the trail. Over half of the business owners along the trail reported an increase in customers and 48 percent reported an increase in revenue, figures which in reality could be higher or lower since the data is self-reported. However, around 40-50 full-time positions were added to businesses along the trail to keep up with growth, as well as 50 part-time positions.

The city’s in-house analysis of the trail’s impact report that it is “well-liked and utilized,” and has enormous potential for further growth.

In 2010, Vancouver’s city council forged ahead with the construction of protected bike lanes on two of downtown’s busiest streets, to the very vocal disapproval of local business leaders. The Downtown Vancouver Business Improvement Association, on behalf its members, expressed palpable anger about how the loss of parking would impact their businesses. Six years later, the BIA has changed its tune, with its leader claiming that most business have seen moderate improvements in their bottom line, and appreciate that the new bike lanes are well used and bring more people downtown.

Local coffee shop company JJ Bean, which has a location along one of the new lanes, was encouraged by local cycling advocacy group HUB to go one step further and sacrifice two of their parking spots for a row of bike racks. After a little deliberation, they went ahead with the idea and installed the bike racks on their own dollar. “We think it has been great, definitely a positive decision!” said JJ Bean Vancouver retail leader Jesse Neate. “The biggest value add we see is a greater sense of community. It adds an element of safety for people hanging out on sidewalks as it causes cars to be more cautious. We also love the ease of access, it helps people to be environmentally conscious.” 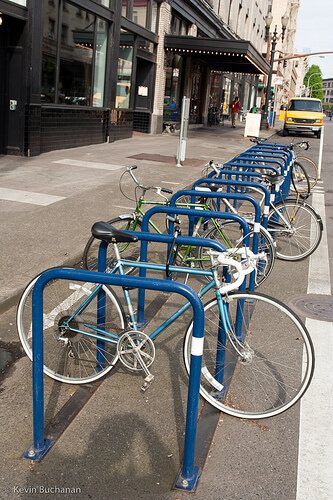 In 2004, the City of Portland began a program to increase the city’s bicycle parking capacity with the modest installation of a single bike corral – protected on-street bike parking – outside Fresh Pot Coffee Shop on N Mississippi Avenue. The bike corral consisted of a number of bike racks permanently installed across what was formerly two parking spaces, protected from traffic by a short buffer. Critics laughed and some business owners grumbled, but the city went ahead with the plan nonetheless. The “doomed” experiment turned out to be such a success that, by 2013, there were 97 corrals across Portland and a long waiting list of businesses chomping at the bit to get their own bike corral.

A 2015 study by Drew Meisel at Portland State University looked at the benefits of the bike corrals to local businesses. Based on web-based surveys, local business data analysis, and a basic land use inventory, Meisel found overwhelming support from local businesses for the corrals. The top 5 effects of the increased bicycle parking, as reported by the businesses, were promotion of sustainability, enhancing the street and neighborhood identity, increasing transportation options for employees and patrons, increasing foot and bike traffic, and increasing the visibility of the businesses from the front.

Australian researchers Alison Lee and Alan March, influenced by the intensifying debate over the best allocation of public space, undertook a study to determine the economic benefits of car parking lots compared to infrastructure for other modes of transit. In the auto-centric world of Australian urban design, what they discovered surprised many.

Using the case of study of the retail-dense Lygon Street in Melbourne, Lee and March concluded that bicycle parking had a greater return on the investment of space than car parking. Though customers who arrived by car spent more per hour than those who arrived by bike, the comparatively smaller space it takes to park a bicycle means more customers, and thus more money. As they wrote in their report, “The small area of public space required for bike parking means that each square metre allocated to bike parking generated $31 per hour, compared to $6 generated for each square metre used for a car parking space.”

Your trusted, local bike shop with over 50 years experience on staff